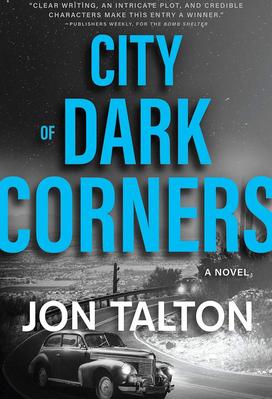 Coming in May: City of Dark Corners.

Great War veteran and rising star Gene Hammons lost his job as a homicide detective when he tried to prove that a woman was wrongly convicted of murder to protect a well-connected man. Now a private investigator, Hammons makes his living looking for missing persons―a plentiful caseload during the Great Depression, when people seem to disappear all the time.

But his routine is disrupted when his brother―another homicide detective, still on the force―enlists his help looking into the death of a young woman whose dismembered body is found beside the railroad tracks. The sheriff rules it an accident, but the carnage is too neat, and the staging of the body parts too ritual. Hammons suspects it's the work of a "lust murderer"―similar to the serial strangler whose killing spree he had ended a few years earlier. But who was the poor girl, dressed demurely in pink? And why was his business card tucked into her small purse? As Hammons searches for the victim's identity, he discovers that the dead girl had some secrets of her own, and that the case is connected to some of Phoenix's most powerful citizens―on both sides of the law.

"Gene is an amiable and savvy protagonist, and Talton shines in weaving together the mystery elements of the plots with historical events from the Prohibition period. Fast-paced, gritty, and exciting, this one will have fans of both Depression-era and southwestern-set crime fiction begging for more!" — Booklist STARRED REVIEW

"This gritty stand-alone deals with Phoenix’s rough-and-tumble past and its questionable police force in the 1930s. Talton excels at creating the ambiance of historic Phoenix. Suggest for fans of realistic historical mysteries or Phoenix Noir." — Library Journal STARRED REVIEW

" References to movie actors and other celebrities of the day, as well as speakeasies and bootleggers, lend atmosphere to this well-crafted tale involving desperate people who could easily disappear. Hopefully, Hammons, a man of too much integrity for his own good, will be back soon." — Publishers Weekly

My interview with Steve Goldstein on KJZZ about City of Dark Corners: listen.

Interview with Steve Goldstein on KJZZ about The Bomb Shelter (listen).

Page One article in the Arizona Republic about The Bomb Shelter and the real-life crime that inspired it.​

Crimespree Magazine interviews me about The Bomb Shelter.

A Brief History of Phoenix:

An interpretive history of Phoenix from its founding in 1868 through the present. Published by the History Press, it's also full of historic photos of the city through the years.

"This is a coherent and valuable assessment of our past, useful and accessible and deeply informative. More important, A Brief History of Phoenix offers an entertaining read, even for readers with only a passing interest in our desert city." — Robrt Pela in Phoenix New Times

My appearance on KAET's Horizon.

My March 6th talk at the Poisoned Pen Bookstore.

Phoenix private investigator David Mapstone is a former county sheriff. He gets a desperate late-night call from Sharon Peralta, wife of Mike, Mapstone’s partner. Mike has been accused of being the principal in a Phoenix diamond robbery and has disappeared. The FBI has his truck and wants to find out if either David or Sharon knows where Mike is and if they were accomplices. On the way to meet law enforcement, David is pulled over for speeding. In a truly harrowing scene the young female “officer” who pulls him over apparently intends to kill him until she’s scared off by unexpected traffic. It’s in that context David and Sharon are interrogated by the FBI. The message is unequivocal: they better deliver Mike on a platter. This is a complex, multifaceted thriller in which Phoenix itself is a principal player, with its depressed economy, residual Wild West mindset, casinos, mobsters, and corrupt infrastructure all key aspects of its character. Most of what Mapstone believes is at stake. Did he misjudge Mike Peralta? Is Arizona unrelentingly corrupt? What did he do to unleash a killer into his life and endanger his loved ones. Talton, a longtime journalist and native Arizonan, writes in a spare, beautiful style that parallels the stark beauty of his home’s high country. This is a nail-biting thriller pushed to the next level of excellence by the moral quandaries that drive the plot. The high point of an outstanding series.
— Wes Lukowsky

As with Bill Crider’s and Kevin McGarrity’s mysteries, Talton’s books are studies in atmosphere and setting. Arizona’s wild and beautiful landscape figures prominently, and the interior examination of Mapstone’s hopes and fears makes this a terrific character study as well.

...Intricately plotted.... Talton keeps the reader guessing throughout, but Mapstone's learned, insightful first-person commentary is what really stands out; his comments about the decline of the Phoenix he's always called home are particularly revealing and believable.

Talton expertly contrasts his swift and closely plotted story against a deep, melancholy theme: the grave injustice done by modernization to his beloved Phoenix. The book is rich in period and contemporary details, as well as fascinating nuggets from the region’s earlier history.

As a result, “High Country Nocturne” is both an absorbing detective story and a vividly written elegy to a day when, as Mapstone puts it, people read books other than “Harry Potter” — and when the writer’s hometown was not the soulless sprawl it is today.

A fast-paced mystery told in the first person by our protagonist, David Mapstone. This book is number eight in the author’s series about David Mapstone and it doesn't disappoint.

There was much to enjoy in Talton's beautifully written literary lamentations for Phoenix the way it used to be. This is where the writer really shines, recreating for us in word pictures a saner pace of life, a more gracious architecture, and a more expansive landscape. It may be a different corner of the country, but the native Southwesterner captures the helplessness we native Northwesterners often feel about the desecration of the landscape and the thoughtless development we've witnessed right here.

This fast paced mystery is intricately woven to end up with a completely surprising, yet deliciously satisfying end.

Depicting the atmosphere and culture of Arizona, High Country Nocturne provides the kind of tense mystery that should delight genre readers with a special affinity for Western settings and intrigue.