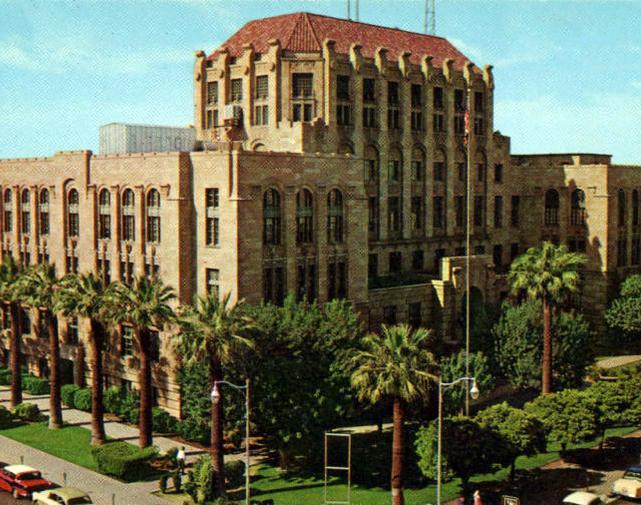 David Mapstone's office is in the historic Maricopa County Courthouse in downtown Phoenix.

Jon Talton is the author of 13 novels and one work of history.

His work has been widely praised by the critics. The Washington Post BookWorld said Concrete Desert is “more intelligent and rewarding than most contemporary mysteries.” In a starred review, Booklist called it “a stunning debut.” The Chicago Tribune lauded Camelback Falls for its “twisty and crafty” plot. For Dry Heat, Publishers Weekly wrote, “Taut prose helps tighten the screws, and the winning, sensitive portrayal of the Mapstones ¬– both of them a relief after too many hard-nosed PIs who are all gristle and no brain – lends credibility to the noirish narrative." Best-selling author Don Winslow called Talton one of America's "extremely talented but under-recognized" authors.

Jon is also a veteran journalist. He is the economics columnist for the Seattle Times and is editor and publisher of the blog Rogue Columnist.

For more than 25 years Jon has covered business and finance, specializing in urban economies, energy, real estate and economics and public policy. Jon has been a columnist for the Arizona Republic, Charlotte Observer and Rocky Mountain News, and his columns have appeared in newspapers throughout North America on the New York Times News Service and other news services. Jon has been a regular guest on CNBC.

Jon served as business editor for several newspapers, including the Dayton Daily News, Rocky Mountain News, Cincinnati Enquirer and Charlotte Observer. At Dayton, he was part of a team that was a finalist for the Pulitzer Prize in Public Service, for the nation’s first computer-assisted report on worker safety. In Charlotte, the business section was honored as one of the nation’s best by the Society of American Business Editors and Writers. Among the stories he has covered are the landmark Texaco-Pennzoil trial; the collapse of energy prices in the 1980s; the troubles of General Motors and the American auto industry; the big bank mergers of the ‘90s, and America’s downtown renaissance. He was a Knight Western Fellow in Journalism at the University of Southern California and a community fellow at the Morrison Institute at Arizona State University.

Before journalism, he worked for four years as an ambulance medic in the inner city of Phoenix. He also was an instructor in theater at Southeastern Oklahoma State University.